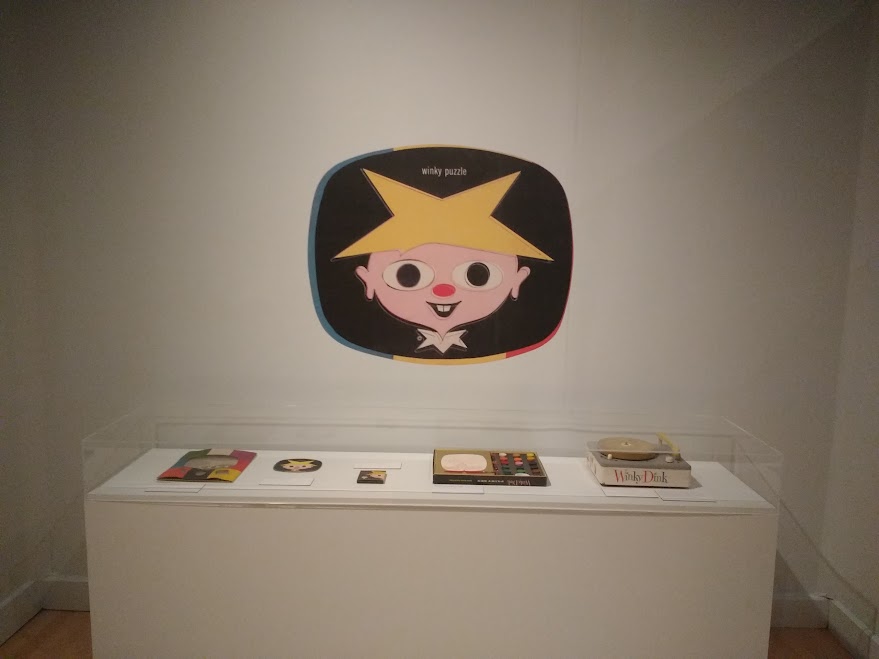 Winky Dink and You, which aired on CBS from 1952 to 1957, was geared toward young children and was television’s first fully interactive program. It inspired young Americans to create and explore the possibilities of visual art, exemplifying, as well, the virtues of the new medium as an instrument of art making and instruction. The avant-garde filmmaker Stan VanDerBeek was one of its animators.

Winky Dink employed a “magic drawing screen,” a panel of transparent green vinyl that adhered to the television screen via static electricity. The first Winky Dink kits, containing the vinyl and special crayons, could be purchased by mail for fifty cents.

During a climactic scene in every episode, the show’s central characters would find themselves in a situation that contained a connect-the-dots image, prompting home viewers to complete the picture by drawing on their television screen. Children also used the interactive screen to decode messages or to create imaginary characters.

(Above) installation view, Revolution of the Eye, Center for Art, Design and Visual Culture, UMBC, Baltimore, September 2016. Courtesy of CADVC The Winky Dink record player, issued as a promotion, is decorated with a frieze of Winky, the show’s title character, playing musical instruments to emphasize the program’s aim to encourage children’s interest in the arts. Similarly, the Winky Dink paint kit fostered the creation of art even when viewers were not interacting with the program. Stan Vanderbeek, one of the animators for Winky Dink and You, was an experimental filmmaker influenced by Dada and Surrealism. He had studied art and architecture at the Cooper Union in New York and Black Mountain College in North Carolina, where he met the architect Buckminster Fuller, the composer John Cage, and the choreographer Merce Cunningham. Vanderbeek’s early films, made between 1955 and 1965, are composed mostly of animated paintings and collages. His adventurous approach—typified by his short film Achooo Mr. Kerrooschev—is discernable a decade earlier in some of the animated sequences of Winky Dink and You.